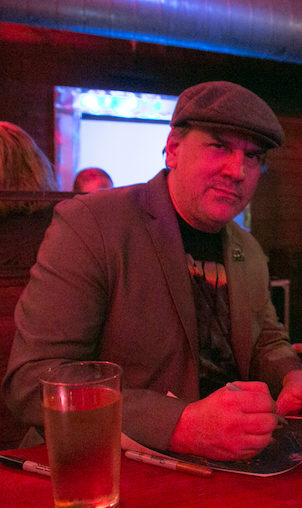 Played Thimbleweed Park. Loved it, just like most reviewers did. Here’s a talk I had about the game with developer Ron Gilbert, about a month before release.

Three decades ago, Ron Gilbert was one of the driving forces behind a brief but powerful rise to prominence for adventure games. He poured a new dynamic of humor and thoughtfulness into the genre with his zany Maniac Mansion (1987), made an epic bricolage of National Enquirer headlines into Zak McCracken and the Alien Mindbenders (1988), concocted a wonderful graphic adventure adaptation of Indiana Jones and the Last Crusade (1989), and – last but not least – created the Monkey Island series (1990-2010). After he left LucasArts in 1992, he founded and sold Humongous Entertainment, his own label under which he created educational titles such as Freddi Fish and Pajama Sam, and went on to do contract work as a programmer, producer and design consultant. That worked for him until three years ago, when he decided to return to the genre he once ushered to stardom with his Kickstarter-backed game Thimbleweed Park. 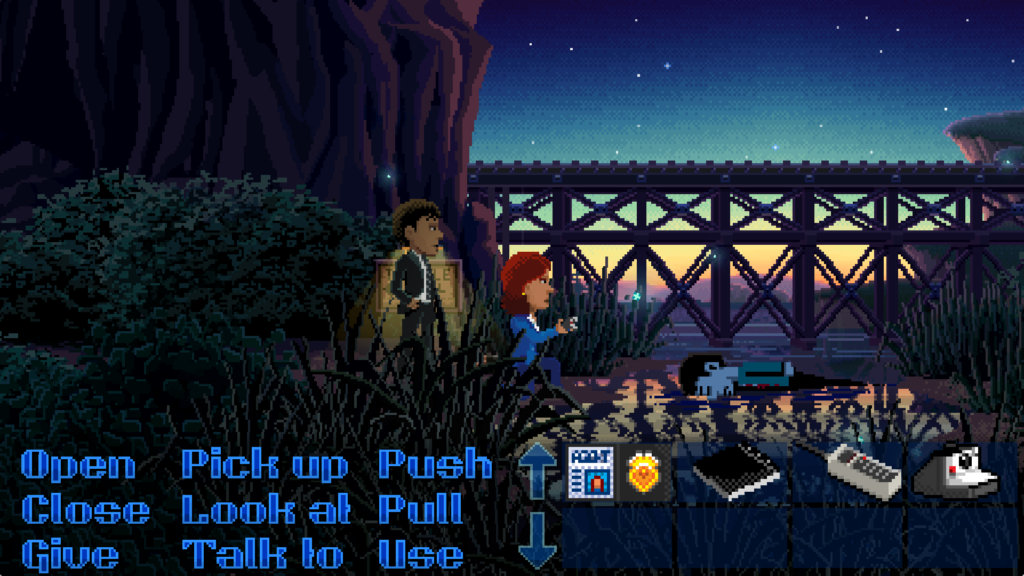 Why did you specifically want to return to the adventure genre?

“I’ve always loved these games, obviously. The game just came about because Gary (Winnick, Gilbert’s long-time collaborator) and I were having lunch one day, and talking about those old games and their charm. Look at Monkey Island, Maniac Mansion, Loom: there was this charm to them that a lot of modern games just don’t have. I can’t really define what that charm is, but our idea was to just build a new one exactly like the ones we used to make. With the same charm, whatever that was. We just thought we could bring it back.”

The Monkey Island games, which were in many ways the apogee of the golden days of the genre, are a quarter century in the past now. How do you plan to bring new generations of players into the adventure genre?

“Narrative games are hugely popular right now: look at Gone Home, Kentucky Route Zero, Firewatch. These are games that are primarily driven by their narrative, and they connect to today’s generation of gamers. Our goal was not to build a retro point-and-click game. It was to build a game that uses eight-bit art for aesthetic reasons, because we love it, and one that is mindful of what worked and didn’t work in the old games we made, in terms of design. We wanted the game be something that can be accessible to modern narrative game players, but without alienating the ones who loved the classics. I think we’ve done it right: when you play the game, it feels exactly like Monkey Island would have felt, but it’s a lot slicker. For example, when you talk to somebody now, and he gives you an assignment, he repeats it whenever you return to him, because you didn’t quite get it the first time, or you forgot. That didn’t happen in Monkey Island: it was very rare they would repeat what they just told you. In those days, we just expected players to write that down. In Thimbleweed Park, characters wil reiterate what they need you to do, and they might even become a little more explicit about what they want you to do. It’s subtle stuff, but it could remove a barrier for modern players: it helps them not feel lost and confused. Hardcore players probably won’t even notice these changes, because they might even falsely assume those things were already there in Monkey Island.”

Twenty years ago, the adventure game had reached its peak, and swiftly waned thereafter. Do you feel video game audiences missed out in those two decades?

“I don’t think adventure games disappeared; I think they just naturally morphed and changed, over the decades, into this narrative type stuff of today. Like the Telltale games, such as The Walking Dead and others, which you could very well call adventure games. There are still millions of people around who want to play these types of games. But they kind of got away from the more classic puzzle solving as a mechanism. In a lot of ways, I think that’s adventure game makers’ own fault: A lot of puzzles just got stupid. Standard adventure games, started getting a bad rap for just having these ridiculous puzzles. Adventure game puzzles can be challenging, but they shouldn’t be confusing. Our hope with Thimbleweed Park is to bring back this puzzle-solving mechanism, but with puzzles that are not ridiculous or stupid. They’re good, well-designed, challenging but not frustrating. Our goal is to have someone who enjoyed a game like Firewatch, but has never played a puzzle-based game, enjoy this one.”

Has the emergence of today’s indie movement in video games helped you build an audience for games like Thimbleweed Park?

“The indie scene, and services like Steam, and programs like ID@Xbox, diversified the audience that is out there for video games. People like Overwatch, but they also like Kentucky Route Zero. The audience is big enough to have niches that are completely sustainable. Look at 8-bit art, which has kind of moved away from this thing you needed to do in the distant past because of technical limitations. Today, you do 8-bit art for artistic reasons. Because you love it. And you want to explore what it can be today. When you play Thimbleweed Park, it’s not a game that could just as well run on an Amiga: it looks a lot better. We use shaders to cast dynamic lighting on stuff. We put lots of enhancements like that in them. When you play Thimbleweed Park, we want you to play it like you remember those old games, but not like how they actually were.”

You were amongst the first game designers to voice the opinion that video games might evolve into a new art form. Are we there?

“We’re there. There’s no question about that. You look at a lot of video games being made today, and they’re artistic in nature. I’m not really talking about the art inside the game; I’m talking about the messages that these games convey. Look at a game like Papers, Please: that’s definitely a work of art. There’s a messaged being conveyed in it, that it’s not just a game mechanic of jumping around, there’s a deeper thing going on. That’s what art is. It invokes feelings in people. There are games that are definitely doing that.”

When you made Maniac Mansion three decades ago, people weren’t talking about games becoming art. Games weren’t even a proper entertainment medium yet. Did you foresee them becoming one at that point in time?

“It was certainly my hope. When I made Maniac Mansion and Monkey Island, games were probably viewed as toys for kids. I think a lot of people still view video games like that. But the audience has widened significantly, and I also think it’s a generational thing. You look at people in their twenties today, they have not known a world without video games. For them, this is an entertainment form that is no different than movies or television or books. It can occupy that same artistic level for them. That will only grow as time goes on; People who see games as toys are predominantly the ones that didn’t grow up with them.”

You created the humor of Monkey Island, Zak McKracken, Maniac Mansion and other older adventure games out of influences like the classic Saturday Night Live show, in its Bill Murray and Dan Aykroyd days, or Monty Python’s Flying Circus. What influenced you for Thimbleweed Park’s jokes?

“Humor is always difficult. But the TV shows that I watch these days are things like 30 Rock, Parks and Recreation, or The Unbreakable Kimmy Schmidt. One of the reasons I enjoy TV shows like these is because they allow for a slow, comedic buildup. They’re not interested in bringing in joke after joke after joke like a sitcom. They’re not afraid to lay the foundation for a joke, and then make it pay off fifteen minutes later. I think that’s an important rule when you do comedy: you have to be okay with letting jokes build themselves up, with building the world a little bit, and then slowly letting the joke emerge from this world.” 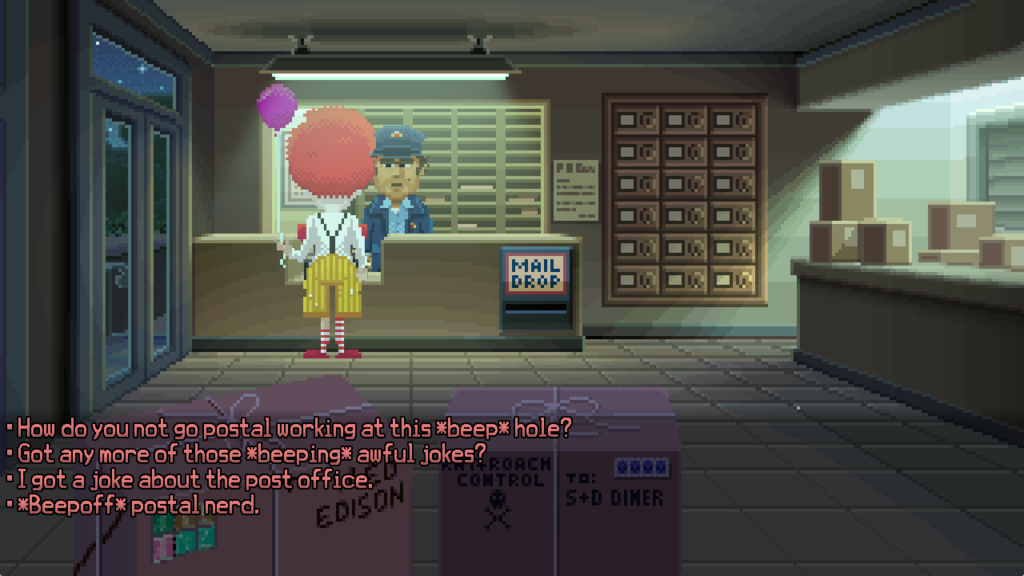 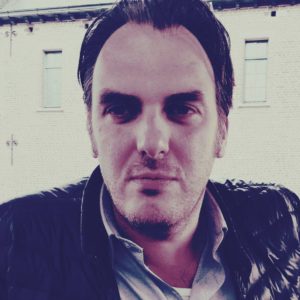